In Charles Finch’s mystery novel The September Society, detective Charles Lennox is found sitting quietly in Oxford University’s Bodleian Library.  It is in this scene where Finch describes one of the oldest university libraries.  He writes, “A library – it didn’t sound like much, but it was what made Oxford itself. The greatest library in the world.” 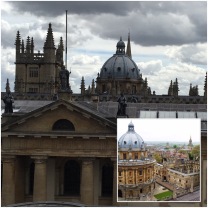 The Bodleian Library is an ancient library and its roots go back to the 14th Century.  The “Bod” has housed rare manuscripts and book collections for over 400 years.  It is home to historical music, wonderful art, one of the world’s largest map collections and over 12 million printed items.  In many ways this library serves as a benchmark for most other university libraries. Over the years, even Ivy League schools have had a desire to replicate the grand Bodleian.  When agreeing to become the very first president of Cornell University in 1865, Andrew White said his university must have a library “as rich as the Bodleian”.

Time in the Bodleian

While in England I was provided research privileges in the Bodleian Libraries of the University of Oxford. These libraries form the largest university library system in the United Kingdom. Within this system, a good portion of my time was spent in the Duke Humphrey Library – the same room  below that detective Lennox found himself.

While reading and researching issues related to higher education, it was impossible to not be aware of the history and eminence of the place. It was during my time in Sir Thomas Bodley’s library that I was reminded of Dewey’s reference above to an unsettled and unfinished world – that change goes on. This quiet time gave me the opportunity to think more about the history and the changes taking place in university libraries.

As a faculty member and as a university president I believe teaching and scholarship collectively form the foundation upon which great universities function.  I also agree with former US Secretary of Education Harold Howe when he stated, “What a school thinks about its library is a measure of what it feels about education.” It is in this context of what I feel about education that I share my general observations of the department Drew Faust once described as “the university’s circulatory system” – the university library.

Libraries are not new institutions and although there appears to be some disagreement in terms of the oldest library, it is safe to suggest that one of the very first libraries in the world was the Royal Library of Alexandria. Located in Alexandria, Egypt the library and most of its 400,000 manuscripts perished around 300 BC.  The Royal Library was not alone. Roman and Greek societies ensured their public libraries were open to all citizens.

Al Qarawiyyin University  located in Fex, Morocco was established in 859. To put that in perspective, StFX University is one of Canada’s oldest universities yet was founded nearly 1000 years after Al Qarawiyyin!

Al Qarawiyyin library is the oldest existing university library in the world and is home to some of the most treasured Islamic manuscripts. By coincidence the library was recently refurbished to its rightful glory by Canadian-Moroccan architect Aziza Chaouni.

In North America libraries are a more recent phenomena. Several centuries ago they were often parochial rooms located in churches or within buildings controlled by wealthy families.  Among the first American public libraries was a structure built by Rev John Checkley in 1725. Just four years later the first public library in Canada was founded by Governor Frederick Haldimand in Quebec City.

Neither of these examples were the first libraries in North America. That recognition appears to rest with Marc Lescarbot and the private collection of books that the scholar, poet and lawyer brought to Port Royal in 1606!

It is interesting that university libraries are generally older than public libraries. In 1638, John Harvard bequeathed 400 books to the university in his name. Today, the Harvard Library has become an administrative centre that oversees 73 interdependent university libraries. It also has over 18 million volumes on it’s Cambridge, Mass. campus.  In Canada, university libraries took slightly longer to be established.  Bishop Charles Inglis created the first Canadian university library when he provided Nova Scotia’s Kings College with books in theology and classics at the turn of the 19th century.

Libraries – The Foundation for Academic and Life Success

Although library history is interesting, it is the impact that these institutions have had over the years that is most important. Fundamentally libraries contribute to good citizenship. They are the medium through which citizens gain access to information and knowledge. This value was nicely reflected by the late American science fiction and fantasy writer Ray Bradbury.

Bradbury was born prior to the Great Depression. Like many young people at that time, Bradbury was unable to attend university. However he compensated for his lack of formal education by spending many childhood hours in the Waukegan, Illinois library. Bradbury went so far to suggest, “libraries raised me.”  A great supporter of libraries throughout his life, Bradbury once claimed “without libraries what have we? We have no past and no future.”  It was this passion for libraries that undoubtedly influenced Waukegan to name its library in his name.

Historical support for libraries is worldwide. Swiss philosopher Henri Frederic Amiel once stated, “Everything you need for better future and success has already been written. And guess what? All you have to do is go to the library.” No doubt this may have been accurate in his day yet Amiel died before the beginning of 20th Century.   As I sat in the Bodleian Library and reflected on the challenges facing university libraries today,  I wondered if the opinions of Faust and Bradbury and Ameil were still current.

President and Vice Chancellor Professor, Faculty of Education St. Francis Xavier University
View all posts by kentmacdonald →
This entry was posted in Leadership and Higher Education. Bookmark the permalink.

3 Responses to The University Library – Part 1